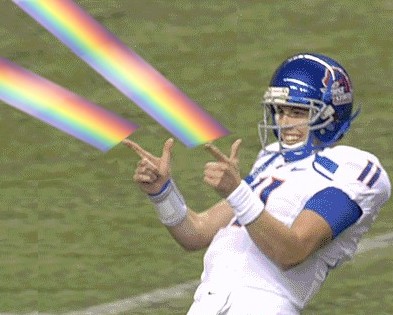 So NitPicks officially was fired up last week for week 1 of the college football season, but this is the first of the year with the full slate, including the NFL. Let’s get right into it.
1. To the drunken Massholes who were sitting behind me at Fenway last month, THIS ONE IS FOAH YOU, KAHD. You did it. It worked. Your chanting “FREE TAHM BRAYDEE” for seven innings at an August Sox-Rays games. IT WAS FOOTBALL SAWKS NATION AGAINST THAH WAHLD KID AND YOU PREVAILED. FIYAH GOODELL. MOAHT IS A LIYAH. THE BELLS OF FREDOM AHR RINGING FROM FAHL RIVAH TO RAVEAH. VIVA LAH STOOL KID.
You did it. You did your job.

2. On an unrelated note, this column will, for reasons related to having a life and school and other stuff going on, sometimes be out by the time games start on Thursday, but sometime it is going to be Friday or (hopefully not but maybe even) Saturday. Just an FYI. If I want to pick a game that I miss (usually the Thursday night NFL game or a Thursday night college game-if there is a Friday night game I want on the list I will be sure to get it out on Friday, I will tweet the pick (FOLLOW @OVSportsJack, duh), and embed the tweet (which will include a timestamp) in the column.
A few Thoughts From Week 1 of College Football

4. Ohio State is going to be, like, really good. It is so hard to see them not heading into the playoff undefeated this year. Sure, they gave up 24 to a VT team that didn’t look all that impressive heading in, but they are going to move the ball at will with their 4 stars on offense. Hyperbole will be thrown around about ‘greatest team/offense’ ever, and while that’s a stretch, they are going to be historically good. The best hope for competitiveness is that Michigan State is as good as advertised, but there don’t appear to be any roadblocks for the Buckeyes before those two meet.

5. #PrayForThePac12
The other day I tweeted this:

I’m not even sure it was a joke, and that isn’t because I think the MWC is going to be a bunch of world beaters. Last weekend the Pac-12 lost to 2 MWC teams, one of the most highly rated teams in the conference (ASU) went down, and Wazzu lost to a non FBS team. On top of that, Arizona (UTSA), Oregon State (Weber State), and Oregon (Eastern Washington) failed to blow out opponants that should have been vastly inferior. Only Cal (Grambling State) and USC (Ark. State) looked impressive.

8. I’m back in the fantasy game this year after a one year hiatus. I don’t know what the effect will be on this column or any other because generally speaking talking about your fantasy team is about as interesting as talking about your march madness bracket or golf game, but I’m sure I’ll have some things to say that will make their way into here.

9. So my NFL gambling season got off to about the worst possible start, with my having the Pats MINUS SEVEN AND A HALF. No kidding that’s probably the worst beat I’ve had.  Last second meaningless touchdown to back door while I had to hide my reaction in a late class. WOOF. Also, trying to explain that to a foreign girl was arguably the hardest thing I’ve ever done so there’s that.

(If you don’t want to hear me talk about Boise State you can skip from here to the picks but you shouldn’t because WHAT IF I SAY SOMETHING SUPER FUNNY??? You’d miss it.)

10. This week, something happened that I would have thought would have me over the moon. My favorite football player, probably ever, signed with my favorite team.
That’s right. The GREAT Kellen Moore is a Dallas Cowboy.
Problem is he is on the praccy squad, which is going to make it much harder for me to get a jersey, but I now have to root pretty hard for Brandon Weeden to get a season ending but non-life threatening or rehabilitating injury.